For the last 134 years, people have been taking photos of the Andromeda galaxy. However, everyone up until this day has missed some pretty big details, and those details are shown here for the first time ever in history. I am proud to present to you the newly discovered nebula which I have helped confirm alongside Marcel Drechsler, Xavier Strottner, Yann Sainty, Sean Walker, Stefan Kimeswenger, and Robert Fesen.

In an amateur photograph of the Andromeda galaxy (Messier 31), a prominent arc-shaped [O III] structure was discovered in August 2022. The arc has an extension of about 1.5 x 0.45 degrees, a distance of only 1.2 degrees from the center of M31 and is located in the southeast of the galaxy. Messier 31 is undoubtedly one of the most photographed deep-sky objects ever. All the more surprising was the discovery of a structure in the immediate vicinity of the galaxy. To exclude the possibility of errors (reflections in the optics, artifacts of the detector, amplifier glow, etc.), four separate photographs were taken with [O III] filters from different manufacturers by four different photographers at three different locations around the world at different times. The existence of the object was thus confirmed beyond doubt.


The exact nature of the M31 [O III] emission arc is still unknown, but given the circumstantial evidence, likely scenarios can be assumed.
It's possible that Strottner-Drechsler-Sainty Object 1 is an arc segment of a galactic supernova remnant, or a bright part of an ancient galactic planetary nebula and thus far in the foreground as part of our galaxy.

However, researchers on the team believe other scenarios are more likely.
In it, the arc is in close proximity to M31 and is formed by violent interactions of stellar and tidal streams due to galactic mergers around M31. Up to the possibility that the arc is halfway between us and M31, and it is an interaction shock of the galactic halos of the Milky Way with that of M31. This would therefore be a gigantic structure between the galaxies or in the vicinity of M31 itself.
Considering the position of the [O III] arc, it seems obvious that this structure could be one of the numerous tidal or stellar streams which are almost always formed by the merging of smaller structures during the formation of large galaxies throughout their evolution over billions of years. However, a comparison with scientific work showed that the M31 [O III] emission arc does not match any of the known stellar streams and is completely unknown to science so far. On comparison images of luminance photos and [O III] photos, the arc appears much brighter than all known stellar streams of the galaxy. 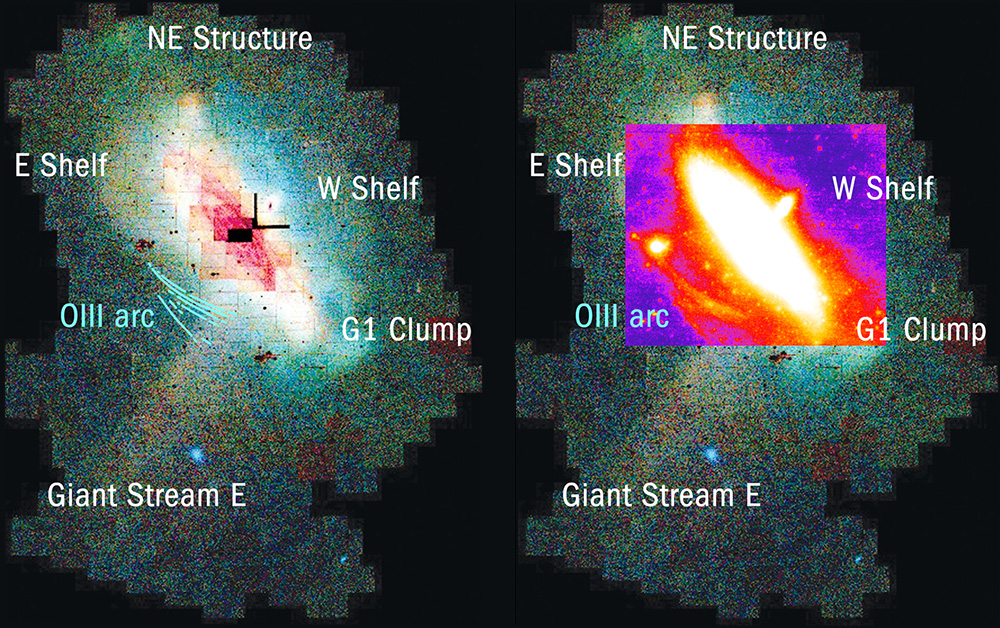 Top left: Illustration of the 50 kPc region around M31, the mosaic of the Isaac Newton Telescope with the 5 Known Large Structures.
top right: Overlay with the [O III] image by Bray Falls (false color representation). The figure shows that the [O III]-arc is in a 90 degree angle to the known "Giant Stream E" 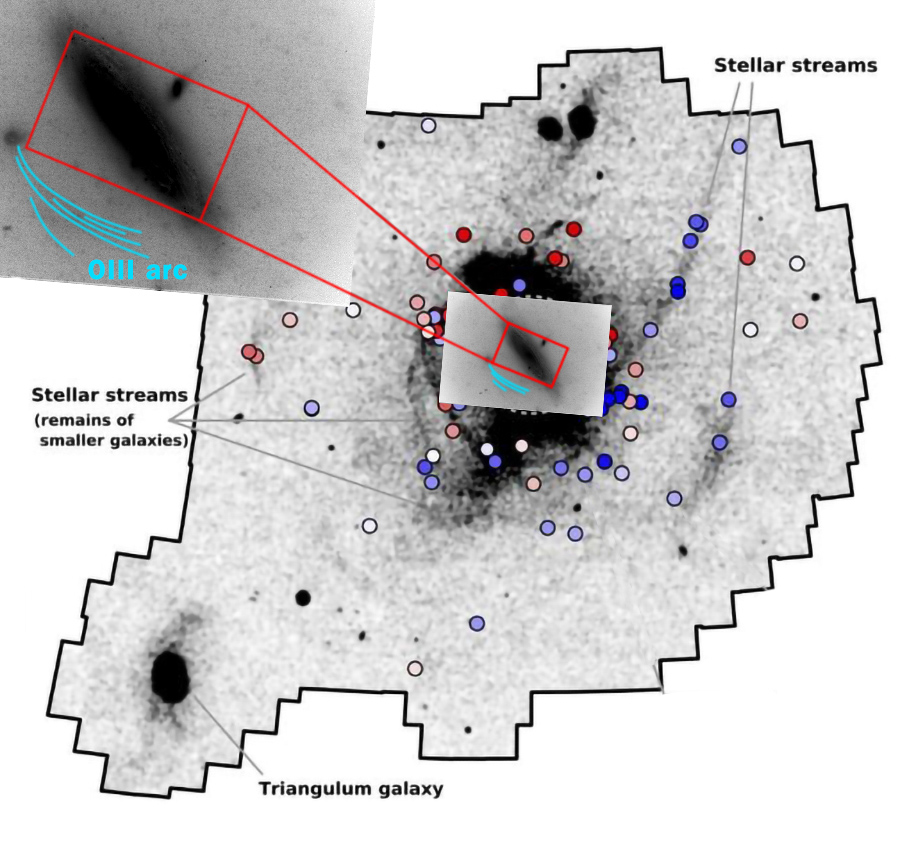 Luminance representation of the 150 kPc region of M31